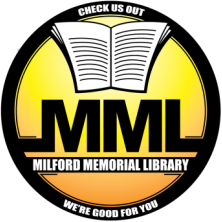 The History of the Milford Memorial Library

A History of the Milford Memorial Library, as detailed in the 1992 Milford Centennial Book.

The first library in Milford was started in "Old Town" by the settlers.  In the year 1923-1924, the Milford Federated Women's Club established a town library as one of their projects.  The committee was made up of Mrs. Fred LaFontaine, Mrs. Wilbur Moreland and Mrs. Ollie Holcomb, who went from house to house and solicited books to start the new library.  Lumber for the bookcases was donated by H.C. Moeller, and the shelves were built by Mr. Ward Sandford's manual training class at the school.  Each club member took turns keeping the library open the specified number of hours each week.

A few years later, a state law was passed allowing towns to levy a tax for libraries, and ever since the town of Milford has maintained an excellent library.  The early library was located in the town hall, and when the new town hall was constructed, space was made available for the library also.  In 1965, a new building was built at 1020 10th Street.  This was made possible through the generous gift from Marion and Alice Billmire.

Another generous gift, from the Herbert and Marie Janssen estate, allowed for the remodeling of the library's lower level at the 10th Street location.

Today, the library is part of the Milford Community Building at 1009 9th St., a project that was completed in the Spring of 1999.